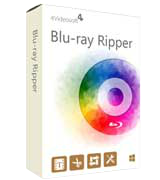 Garmin Express
Developed by Garmin Ltd or its subsidiaries

Has anyone managed to rip a 3D blu-ray to a 3D file (e.g. using the split screen option)? The rip just fails no matter what 3D settings I choose. If I set it to a 2D file it works fine, but without the 3D video of course.

The main reason/benefit for Blu-ray is that it's the highest rez picture you'll probably get your hands on. The main downsides IMHO are heavy DRM -- to the point that legitimate playback may not always work -- and discs that are fragile when it comes to scratches compared to DVDs.

When you want/need video in a size or format that's not readily & easily available, you want to use the highest rez source possible, because the conversion will unavoidably lose some quality -- the more quality you start with, the more you can afford to lose. 4Videosoft Blu-ray Ripper is a converter that works with Blu-ray discs or folders as the source.

In terms of ease & convenience, you're better off with on-line streaming. Second would be just playing the existing Blu-ray video, assuming you can handle the file sizes & bit rates. If that doesn't work for you, and you want to convert, the best place to start is with software like 4Videosoft Blu-ray Ripper, that already understands the somewhat un-timed AVC video on a Blu-ray disc... LOTs of software will not, causing audio sync problems.

The app itself is light weight, with the program's folder, + folders in ProgramData, My Documents, & [UserName]\ AppData\ Local\ -- Uninstall & 4Videosoft keys are added to the registry. I first tested and monitored the app in a VM -- I had to get a new key to register it in a regular copy of Windows... [I don't know if the keys are hardware specific or if each key can only be used once.]

The problem is DRM. A retail Blu-ray disc can have hundreds of fake playlists, or it can generate the playlist on-the-fly when you play the disc in a Blu-ray licensed player, e.g. PowerDVD Ultra. The video itself can be split into more than a dozen individual files, with fakes thrown in, & only the real playlist will list the right files in the right order.

I stuck a Blu-ray disc in the drive & opened it in 4Videosoft Blu-ray Ripper. After scanning all 213 playlists using the cloud, it listed them all, *In No Particular Order* -- assuming you knew which playlist to use, it would still take [IMHO too much] time to scroll through them all to find it. 4Videosoft Blu-ray Ripper is much better then if just the video content you want [e.g. the main movie title] has already been copied to your hard drive, with a single playlist BTW, using other software. That does not make it unusable or worthless -- much of the software you'd use to copy that content to your hard drive will not do any conversion.

To test it I used the clipping option to select just a short, 3 minute video clip. When I did that it added that new clip in the list of playlists, with the original full video still selected -- if you don't catch that & unselect the full video, it will convert it 1st. I selected the anamorphic 1440 x 1080 frame size -- it makes for smaller files but expands in a compatible player to 1080p -- but it didn't work, and the result was a full 1080p. Speed was OK, but even with the option to use my AMD graphics card off, it didn't reach even 50% CPU on this i7 -- I would expect ~60-80%.

Also, even though subs were selected, they were not present in the converted MKV file. That said, the better way to do it is to OCR the original subs to a text file [.srt], which can be displayed by more players. Again however you'd need other software to decrypt the disc so you could access those sub files.

Your choices for audio formats are also a bit limited, e.g. mp3 & AAC. If you wanted to use something like AC3, or keep the original DTS, you'll have to use other tools besides software to decrypt the disc, then remove & replace the audio track in the video file.

Summary...
4Videosoft Blu-ray Ripper is a very workable app, but it's not a complete solution. Like similar rippers -- which seem to be becoming a bit more rare -- it understands Blu-ray video & can convert it. Also like similar apps it uses ffmpeg, which means it's not ideal for outputting mpg2 video, e.g. for DVD -- I'd expect you'd use 4Videosoft Blu-ray Ripper to reduce the video file size & bit rate while sticking with 1080p [or 720p] AVC. That would make for easier playback on some devices, & can make playing the files over Wi-Fi more doable.

Not working Win10....."the setup files are corrupted. Please obtain a new copy of the programme"

I have been waiting for a half hour & still no "immediate" email - and yes I have checked my junk email and ALL other folders. Please see if this can be rectified. Thank you.

StrategyDeck
Strategy Deck — all communication strategy tools in one deck of tip cards in one application.
$3.99 ➞ 本日 無料提供

Image Size.
Quickly resize and compress multiple photos at once to save your device storage.
$0.99 ➞ 本日 無料提供

Norwegian Translator
English to Norwegian translator that talks to you.
$0.99 ➞ 本日 無料提供

Hungarian Translator
English to Hungarian translator that talks to you.
$0.99 ➞ 本日 無料提供

Estonian Translator
English to Estonian translator that talks to you.
$0.99 ➞ 本日 無料提供