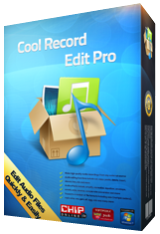 A BIG belated thank you to (deep breath) Lennie, Annie, ozsyd, JerrywithaJ, Robert, Dan O, webeye, rww, Robert (again), mike and tk for riding to the rescue and in all their different ways offering free help, advice, tips and even links to help me figure out how to use this software with an external cassette player. Apologies to all from this non-technical person for not being able to contribute a review and for taking up space on this thread but the very least I can do is express my gratitude to all those GOTDers who have been such a fantastic help to me today!

McAfee LiveSafe blocked the trial download of Cool Record Edit Pro, so I monitored the install of the GOTD in my XP Mode VM. Don't know what, if anything is included with the trial, but the GOTD of course is clean, without any hints of what the problem might be [which is partly what I was after].

That high number of new registry entries reflects Cool Record Edit Pro using NCT files -- from what I could tell in the past Googling, they're older, apparently abandonware. And yes they effect media handling in Windows, while their potential effects on other software depends on whether that software is self-contained or uses Direct Show/Direct Audio files installed in Windows. As far as how well those NCT files work, they're better than some, worse than others, so it really depends on how much you're into audio, & the quality of whatever other software you've installed.

Otherwise Cool Record Edit Pro is easy to use, but it's nothing special, & IMHO not up the level of Audacity or Wavosaur, both of which are available as portable. You can spend Loads of money on audio software & gear, but music is something that loads of people avidly pursue at home, so there's also an awful lot of free software, FX & filters, and hardware hacks you can find online. To take advantage of those FX &/or filters you need software that will use plugins -- Audacity & Wavosaur will, while apps like Cool Record Edit Pro will not.

The ad copy says: "Record audio from any input losslessly"

AFAIK the only way to do that is to save the incoming stream, whether it's a TV signal from a tuner or a stream from Youtube etc. Anything external is subject to the quality of the hardware or equipment used. Recording speaker out -- whatever is playing on your device -- is subject to whatever processing the audio goes through before it heads to the speakers [headphones etc.]. Usually the results aren't too bad, but lossless it's not, which is why some people go through extra effort as necessary to save the actual stream. OTOH you might use DSP software or whatever FX to enhance the audio that's played, & recorded.

In order to record audio playing on your device ideally you just select that as the input in either the software you're using or with Windows audio recording control. Some devices have recording from speakers or playback disabled as a means of DRM -- turning it on can be as simple as going through the properties settings for the device in Windows audio recording control, e.g. commonly with Realtek audio you just have to enable the Stereo Mix.

When that isn't possible some people have found that running/installing the driver setup files from another brand PC, laptop, or motherboard etc. using the identical audio chipset works -- if you Google with your make & model you might find a driver set that works, or perhaps even a simple registry edit that'll do the trick. If that doesn't work you might add audio hardware, e.g. a soundcard or external USB device, but not every one will allow you to record of playing audio, so research beforehand. Or you can try to use a simple cable, perhaps with a volume control &/or splitter, to send the headphone or speaker output to the microphone in jack. Or you can find universal audio drivers just for this sort of recording online, &/or it's included with some recording software.

- This is not Cool Edit Pro- make no mistake about it or get confused by a look a like program name. google for more info on patents and costs...

I'd zero install or register issues (Win 7 Pro- despise Win 10!). I seriously like this, though I haven't had time to do more than just some cursory dabbling with it, it looks very pro about what it can do, and I was in broadcasting for over 20 years. I've been using Audacity for about a decade, and haven't really seen much improvement in that program at all in all that time, and the learning curve for the inexperienced can be very intimidating. Not so much with this. It appears to have all of Audacity's features, plus a few extras, such as the You Tube DL, though since this isn't updateable probably will not work long, if it even does now, as You Tube's parent company Goo-Goo (I despise spyware laden Google anything- same reason I hate Win 10) chnges it's coding on a practically daily basis to prevent DL's. All in all this is a serious keeper, but I'll keep Audacity around til I know for sure. TANX!

I am not clever at tech so excuse my ignorance! People on here have said they'll use today's giveaway "because it seems good" but no-one has yet explained in what way it is good. I have a large collection of music cassettes I would dearly love to digitize. But. . . how? I have a Sony Walkman. How do I get the cassette tracks being played by that or by any other cassette machine onto my PC? The developer says today's software can handle audio from any source but just how does one link that source to a computer in the first place? (Apologies if I'm being stupid.)

SarahB,
You will need a cassette player with line out. You connect this to your computer using a stereo cable and then use a free software like Audacity to record it. I am not familiar with today's offering so I can not comment on that. You can use a mic connected to your computer and use your walkman but the quality will be awful. Hope someone else comes up with a better suggestion.

Match Attack!
Make matches quickly as the board fills up and rises to the top.
$0.99 ➞ 本日 無料提供

Calculator Advanced
The Fx saves your formulas and then you can easily do the calculations you want using these formulas.
$0.99 ➞ 本日 無料提供

NotifiNote: Notification Notes
This app allows you to store your note as notification.
$0.99 ➞ 本日 無料提供

The House
The House. Everything that is happening here is inexplicable.
$0.99 ➞ 本日 無料提供