Giveaway of the day — Ultimate Converter 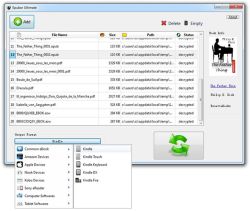 I downloaded today's title onto my laptop (an HP Pavilion using a quad-core Intel i3 chipset, 6GB of ram, and running Windows 7 Home Premium) and gave it a reasonable testing. Unfortunately, while we all download the daily software applications with optimism that they will not only work as advertised, and but also provide some new value that we may not have in our personal inventory of software functionality, today's application does not live up to its stated capabilities in the intro on this page, and is not a title that I would recommend to anyone.

To borrow from the format the Ashraf has so thoroughly made his calling card here on this site:

Pro's:
------
- An easy install, although it does ask for your e-mail, along with the serial number provided, to 'register' the software.
- A clean, uncluttered interface
- A clean, quick, mostly visual 3-screen tutorial when you open the program
- An easily operated, and navigated, software application while in use
- When importing a PDF, epub, or mobi document, it provides a status box to let you know that DRM restrictions are being removed

Con’s:
--------
- This software title only works with 4 types of input documents: PDF, epub, mobi, and HTML, and can only convert to PDF, epub or mobi for the output documents
- As a document format converter, it failed on all 10 PDF documents that I loaded, in that it was unable to convert the PDF doc to either an epub or mobi format
- 6 of the epub docs that I opened were unable to convert the mobi format, and none of them would convert to a PDF format
- 3 of the epubs that I tried to open gave me a ‘structural error’ dialog box (which provided me with the opportunity to enter my e-mail address so that the company could contact me to troubleshoot why the document generated an error). The few epub docs that did successfully convert to mobi opened properly in the Kindle reader app.
- All of the epub documents that generated this error had legal Windows file names and opened cleanly in the open-source Calibre epub reader
- All 5 of the mobi docs that I opened were properly converted to the epub format, but also failed on the PDF conversion

Unfortunately, this title is not yet ready to go to market as a fully functioning, or even correctly functioning, software application. While it would be a nice little document converter if it did work, because of the limited formats (only 4) that you can import, and the fact that you can only output to 3 formats, the value of this title is limited, even if everything worked perfectly, and I do not think the market will accept such limitations for the price they are charging when there are other more capable paid, shareware, and freeware titles available that can handle the same types of document format conversions.

Unlike Corel’s Fusion app that was introduced back in 2011, and which works with over 100 different input formats, or the free (and open-source-based) Hamster ebook converter, this title was unable to correctly convert the formats it advertised, much less work with other common formats such as djvu or chm-formatted documents, or the older Palm pdb-formatted doc’s (even though it did not claim that it could, I tried them anyway as part of the test of this title). Because of the existing competitive products already available, I do not think this vendor will have much success selling this unfinished piece of software at any price, and, even after they do get it working properly, I think they will find themselves forced to lower, or discount, their price significantly given their input/output format limitations (I’m sure that Giovanni, our own ‘King of Freebies’ could provide even more freeware titles that would effectively compete, or exceed, this software app’s current level of performance).

While the performance of this title disappointed me, I want to thank Epubor for making their app available to us to try out for free. On the other hand, as a former software developer who long ago moved into product marketing and sales, I’m always surprised that any vendor would introduce a product to market, much less a site like GOTD which is full of enthusiastic users (with backgrounds ranging from the newest users to full-blown software professionals), and not have fully tested out their product. While I know that the trade-off for our getting to use their software for free is that we all act as beta-testers, and, hopefully, provide the vendor with usable feedback (independent of the thoroughly hated ‘thumbs up/down’ voting system on this site that is abused on a daily basis), it still causes me to wonder at the commercial ineptitude of any vendor that would diminish the perceived value of their offering, and their corporate reputation, by failing to fully test their own application before offering it to an outside group of users / potential customers. And, given how little money they receive from GOTD for agreeing to make their applications available to us, the real value that all of the vendors who come here gain is the exposure of their product to a new (and probably influential) group of potential customers, as well as the feedback they gain from the comments that are given back to them by those willing to comment on their experience with each vendor’s offering.

As far as the issue of having to provide an e-mail address to ‘register’ this product, like many here at GOTD, I used my normal Mailinator.com e-mail to register this app, as I usually do with new software titles from vendor's that I do not recognize -- both here on GOTD and from other freeware/shareware sites. For those of you who do not care to provide your primary e-mail addresses to unknown software vendors, or some of the known vendors here who tend to overwhelm you with e-mails once you register a title with them, I suggest that you surf over to Mailinator.com and check out there very functional service providing free, spam-trapping, throw-away e-mail addresses that become effective as soon as you type the name of the account into their system (without them asking for any other information from you beyond the name of the account), and which deletes e-mails 4-hours after they are received.

On another note, since this is the first time in many, many months that I find myself up this late (here in the US), or ‘early’ by Euro time, I want to take a moment to comment on the series of comments that I have seen over the last 5-6 months here on the site, since returning to GOTD, that have gone back and forth about Ashraf’s comments, and his linkage to his own website, versus those provided by Giovanni. It seems as if some here feel bound to choose sides and defend the individual whose advice they have come to value (I, personally, value both of these young men’s opinions).

What many people here do not seem to know is that Ashraf developed a loyal following of readers at GOTD by posting well thought out summary opinions here, and then linking to his own website for more extensive comments, including graphics, than GOTD’s site is capable of accepting. When he first started, while a university student, he received many a negative comment for linking to his own site, with the accusation that he was unfairly profiting from this linkage, when he actually not only was not earning any money (at least in the beginning) from his site, but was also offering free advertising to those vendors who offered their software titles for free. Ashraf developed his site as an outlet for his creativity and enthusiasm while a university student, and, over time, won over most of the regular visitors to GOTD, including the folks who run GOTD, with his fairness and lack of financial motive. Then, in perhaps what was his smartest decision he exhibited here, he stopped writing for awhile (at least here at GOTD) after graduating from university and getting married (very, very smart decision for a newly married young man).

In the meantime, Giovanni came to prominence here on GOTD, both with his thoroughness in his well researched freeware alternatives, as well as his humor (humour??) with which he posted his comments, even the more so when you consider that English is not his first language. As another young IT professional and motivated hobbyist, Giovanni understands that any vendor who brings a product to market, regardless of the price, ought to have thoroughly evaluated all of the existing competitive offerings available to their potential customers (paid, shareware and freeware). With the success of the open-source movement (think of products such as Linux), or freely offered professional-grade software titles (think of products such as OpenOffice), there is very little margin for error in today’s competitive markets for a software firm that cannot figure out how to determine what, or where, the value is of the product they are trying to sell. And, while some GOTDer’s have criticized Giovanni for constantly suggesting freeware products that compete with each day’s freebie, it is not only a service to his fellow users here, but also a significant competitive analysis service to vendors who come here without having done their homework in advance. Whether they did not think it was necessary to consider freeware alternatives, or perhaps did not have the ‘corporate’ luxury to do so, their success in the market will be judged against all the products available for the function they are offering, and not just a handful of other commercial titles.

On a long-winded closing note, I would hope that most people here recognize that these two young men actually get along with each other and complement the other’s value to the GOTD community. In fact, yesterday I saw where Giovanni had posted some freeware suggestions to Ashraf’s site, along with a friendly comment to him. It disappoints me to see people choosing sides, and attacking the opposite individual than the one they have chosen to follow, when we should all be cheering these young men on. Older, more experienced professionals, such as Fubar or Bubby, or MikeR or Mike, and some of the other’s whose names escape me at the moment, tend to publish more in-depth comments in their areas of expertise (and folks like Fubar, Bubby, and MikeR have many more decades of professional software / IT experience than most of the GOTD community), but tend not to do the more broad-brush, one-off evaluations that Ashraf provides, or the freeware research of Giovanni. If GOTD, as a community, is going to continue to succeed so that we may all benefit from the business model that makes new titles available to us each day, I would prefer that those contributors who give consistently provide reasoned, intelligent, educational, and often humorous, as well as sometimes properly scathing, comments are thanked rather than jeered and attacked.

My $0.02 cents worth for the first time in over five years since I last posted here.

You might pay $50 for this because it is supposed to be able remove DRM. This would allow you to copy library books, for example. Calibre does not remove DRM.


YES...it's SUPPOSED to be able to remove DRM...but does it really manage to remove it flawlessly? Does anybody know that??

As for CALIBRE, if you add this plugin, it can remove DRM protection from most ebooks out there for FREE as well:

But you could also try the superb FREEWARE "ePUBee":

Why would you pay $50 for this when the superb, free software Calibre does a much better job?

Calibre e-book management does the same, and more, for free
http://calibre-ebook.com/